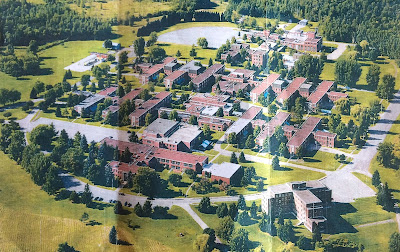 Built in the 1950's,  the Smith Falls Rideau Regional Centre (Ontario Hospital School)  once accommodated 2600  special needs children with cognitive and physical disabilities. The kids could be placed there by their parents or guardians, and they were cared for by approximately 2400 staff. This included a hospital with operating theatres and a morgue, full service kitchens, laundry facilities, a school complete with a gymnasium, swimming pool, theatre, and of course, rooms. Lots of rooms.
So, on any given day, in its heyday, 5000 meals would be prepared three times a day. Times 365 days a year. Times almost 20 years. Good God! 109,500,000 plates of nutritional sustenance served up.
That's a shitload of food. Literally and otherwise.

And that doesn't include seconds, or popcorn, on the occasional movie night!
The Centre slowly closed its doors over a period of  years, phasing out some services, outsourcing others, and eventually, turning out the lights and sending the last of the residents back from whence they came about 15 years ago. About that same time, the homeless population in Ontario began to swell noticeably, schools began to change their curriculae to be more welcoming, diversified, and inclusive, and Special Education became a commonly accepted term. Just as "mentally retarded" and "crippled" became politically and socially incorrect descriptors of human beings with special needs.
It was all well and good.

Except that the massive school cum hospital that was once a force to be reckoned with, and a major economic driver in Eastern Ontario in its own right, sat languishing while unemployed caregivers, social workers, teachers, medical professionals, custodians, cooks and cleaners all went shopping for new jobs.
The services required to run such a massive institution were no longer required, so add plumbers,
electricians, carpenters, gardeners, and food growers to the list, as well as wholesalers of bedding, linens, shirts, shoes and toothbrushes...pretty much anyone who provided any service or product that might be needed by a village of some 5000 people on a daily basis.
My, oh my. What a fun time that must not have been!

Among the many thousands of ideas, that includes everything from condos to private business, high tech secure research campus, cute little shops, emergency evacuation centre, old parrot rehab and palliative care centre (yes), theatre school, fitness training centre, and hair salon, the idea I like the best is one of the ones that is actually working.
All that stainless steel cooking equipment has become the focal point of a local food hub. 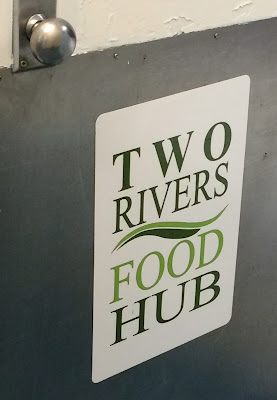 A new venture in collaboration between farmers and foodies, chefs and personal support services, the (now) gleaming kitchen that once fed hordes is once again cooking with gas.  Meals on Wheels uses the kitchen to prepare its delivery dinners, market gardeners rent the prep space, coolers and ovens to process their crops of berries, garlic scapes, tomatoes and all things delicious.
It's a menu for success that creatively re-uses, re-invents, re-purposes,  and re-minds us, that:

Very interesting post!
The message as I see it: times change, things change, but nothing actually gets lost. Everything finds its use and purpose.