It was a brilliant, sunny Saturday  morning in 1980, and I was driving along a snow-covered country road in the   Ottawa Valley. My mood didn't match the passing scenery. Lost in thought about this's and that's and what to do about them all, I barely noticed it at first. A large white football with wings? Oh dear God, an owl! Not just any owl, a Snowy Owl. Practically floating just inches above the hood of my car, its wings steadily beating, and going the exact same speed as me! I have no idea where he came from, but I immediately felt connected and comforted.

Deep inside a childhood memory awoke of my Mother reciting, "A wise old owl sat in an oak/The more he saw the less he spoke/The less he spoke the more he heard/Now wasn't he a wise old bird?" That little nursery rhyme has stayed with me forever, and the wise old owl has been my "spark bird".  My Mom had died  the previous year, and I  believed immediately that this stunning owl, pacing me all the way down the road was a message from her. There were no words. Just peace. That road is about 3 km long, and that bird stayed above the right front part of the car the entire way 'til I had to slow and make a turn, at which point it drifted off across the field and over the horizon. I pulled over and wept. 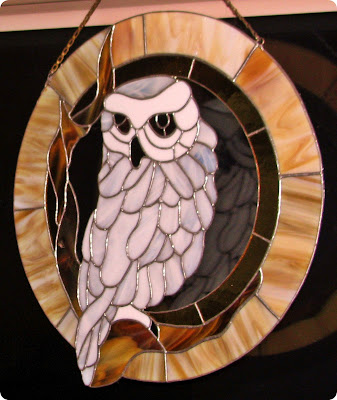 The next siting was several years later. I had moved away, and then moved back again. And in the meantime, had discovered birding. It was another wintry day scouting out the fields and forests along winding country roads by myself. I often bird alone. It's my time to just be. This day was no different as I pulled over to take a look along an old fence line hoping to see a white oval in the distance. I rolled down the window, reached over for the binoculars on the seat beside me and turned to look at the field. And there he was! Landing on a fence post not 2 metres away! Feet first, little bit of  a shuffle and arranging his wings just so, perfect perch, and then he turned his head and met me face on. Staring, not moving. Considering. We looked at each other for about 2 minutes, me barely breathing, but breathing it all in. Then a big shrug and off he flew, directly north of me, across the field. I put the bins up to follow then, and watched in utter astonishment as he landed mid-way across the stubble, pounced on something, alit, and flew right back to the same fence post where I was parked. Now absolutely astonished, I sat and watched in wonder as he proceeded to eat the mouse he'd just caught for lunch. Slowly, surely, holding it in his claws, delicately pecking and pulling, and finally all done! Again, he turned to look at me, while I still stared. I whispered a quiet "thank-you".
He flew off then, and I drove away having just been given a gift  that I would cherish always.
Posted by Susan Ellis at 8:28 PM 5 comments: