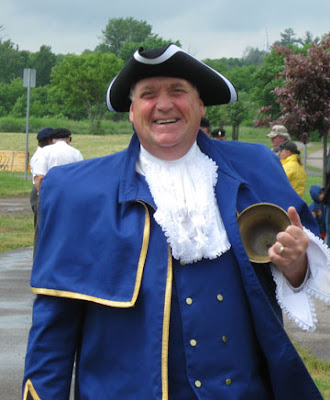 I have never seen our Town Crier cry. In fact, I have only seen him smile, and chuckle, and grin, and outright laugh, right out loud! Even on Canada Day when he was jumping over puddles, dodging lightening bolts, and yelling above the thunder he was positively beaming! Proof positive that it helps to have a positive outlook if you're called to do your duty to God and the Queen in the middle of the pouring rain. Which he does. In spades. And buckets.
Happy people are a tonic. And on Canada Day, it 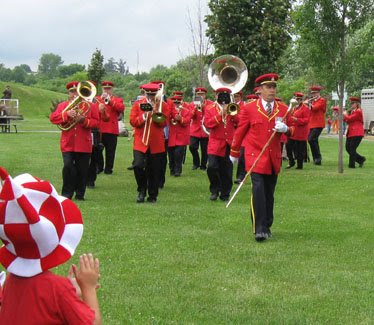 seemed that I was surrounded by them. Makes sense I guess, as who but happy people would come out in the rain to watch the Legion honour the fallen heroes and lay wreaths and play dirges. A sombre enough opening ceremony on a sunny day, but in the rain?? Takes a person with a cheerful inner child to do that.
It didn't pour constantly mind, just enough to give the biceps and triceps a workout opening and closing the umbrella, and flipping it outside in when the wind finished blowing it inside out! Good exercise for the chipper upper lippers among us! 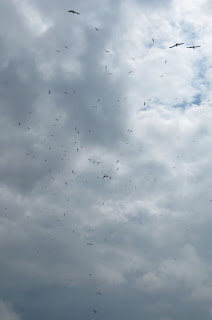 And as we all know, every cloud has a silver lining...and there was no exception to this rule on Canada Day. After it had downpoured for about the 10th time in ten minutes, a city Works guy said, " Well, that's all the rain we're getting for the next few hours." He said it with such authority, that I turned and said to him, "And you know this because???" To which he responded,
"I' m a Newfie". Well, that explains it! But then he pointed up to the clouds, and said "See all the gulls heading out over the river?" Which I did. He said you can tell a storm is coming by watching the gulls. If they are heading inland, there's rain on the way. The further inland they fly, the worse the storm. And, after the storm, they'll head back out over water...which is what we were watching as he explained all of this folkie wisdom. And as we looked up, the sun broke through the clouds, and the sky cleared, and all was well with Canada for the afternoon. Then the gulls flew back to land, all hell broke loose, we had to cancel the fireworks, and bow to Nature's version instead. Which was quite allright with all the cheerful people. And the gulls too - happily chowing down on popcorn and french fries instead of fish.
Posted by Susan Ellis at 6:39 PM 2 comments: