I woke up in a bad mood this morning. It was an inauspicious start to the day. Cats hungry. Raucous crows outside fighting over whatever it is crows fight about. Everything? Whatever, I was feeling cranky too.

Being the middle of a long weekend, the need to do something a little out of the ordinary was niggling me at the edges. My inner athlete was saying, “Hey, get off your ass and do something! Today’s a good day for a bike ride.” So a bike ride it was. We live beside the PPJ Cycloparc, a bike path that extends from the Quebec border on the Ottawa River, and meanders along the river’s edge for about 82 km towards Ottawa. Well, I had no intention whatsoever of going that far, but a little 5 km spin would be just about right, take 20 minutes and leave me feeling slightly superior to my John, who was standing around, drinking coffee, with a hose in his other hand watering the garden in a better mood. Off I went.

Back 20 minutes later, John says, “I know what we can do today...we can go see the new trail they built up to Oiseau Rock. Oiseau Rock towers over the river near Deep River, and is a sacred site for the Algonquin. It’s got native pictographs that are historically significant and years of local graffiti that isn’t. While interested in seeing the site from the top down (as opposed to being in a boat and looking up, which is how I’ve always seen it before) there is a major problem with this suggestion. I hate hills and I hate climbing. Downhill skiing? Good. Cross country? Bad. Flat? Perfect. Up? No. 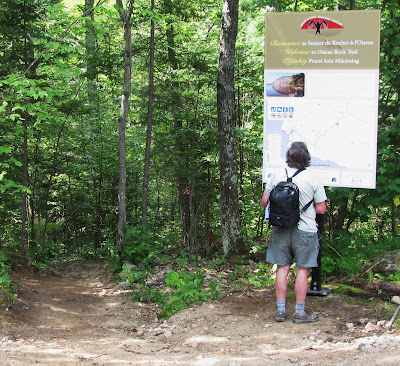 But, I thought, maybe I could give it a go, just to be a good sport. So grumbling flitting gaily around the house I begrudgingly cheerfully gathered water bottles, bathing suits, bags of nuts, and some fruit. The drive -about 20 km from here - heads straight up into the hills (up in a truck is ok) on a poorly maintained gravel road, with lots of sharp turns and loose boulders waiting to attack. Approach signage is minimal, as in one small 8” x 11” plastic sign featuring a pictograph. And if you happen to be blinking at the time, well so sad, you’re lost. Which we were within minutes. However, John does have a great sense of direction (compared to me, who is directionally challenged) and we ultimately found the parking lot at the edge of the trail. There was a sign there explaining the significance of the site, and how the natives revered it. What it clearly did not say was how long the trail is to the top of Oiseau Rock. 4 km. One way. And the very first 100 m was pretty much straight up. Hill. My inner athlete thought “absolutely no effing way Great!” And off we went. Up. Down. Up. Down. Up. Down. For 2 hours. Did I mention that it was 26 C? (83F). No? Well it was. But, and here the truth be told, it’s a beautiful trail, through some virgin forest, green and verdant and filled with birdsong. 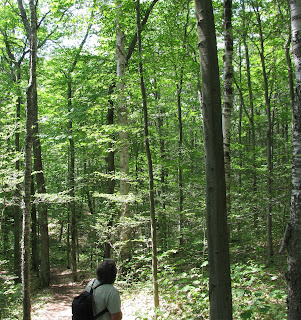 FINALLY we got to a sign that said: Oiseau Rock 2 km. Parking Lot 2 km. Had it been Grand Central Station I would have sat down and wept. And still we walked. We passed three other groups...all returning from the lookout...all quite cheerful and quite sweaty. They mumbled encouraging words as they passed. John cheerfully smiled and said hello. I didn’t. 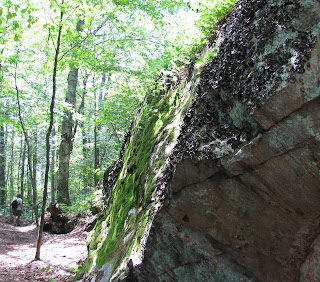 And then it happened. A bend in the trail, and a small white sign depicting Scenic View. Don’t Fall off the Cliff. 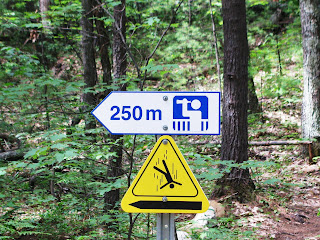 We had arrived at the top and could see the beach far, far below us. The boats looked like tiny toys, the people tiny ants. 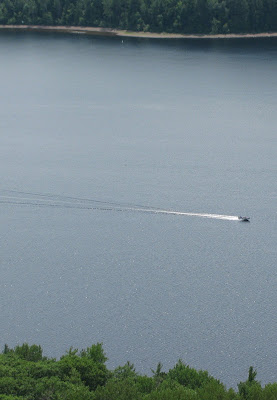 The view of the Ottawa Valley, spectacular. Half way down the rock was the lake people climb up to swim in, and we decided we weren’t going to climb down to swim in, then back up to the top of the mountain again. That was asking too much. Way too much. 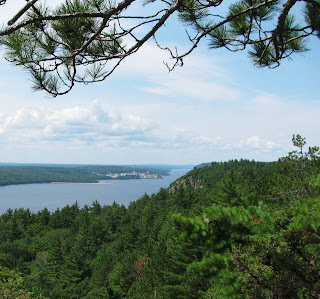 But we had done it! And so we had a celebratory drink of water and a plum. I won’t bore you with the details of the return hike. It was brutal and I almost expired with heat exhaustion challenging. With the air conditioning on full, we made it back home to the beach, and into the kayaks in record time. Paddling out to the swimming hole I realized I was feeling better...fit and full and content.
Diving into the cool water, it was a great way to end the day – and to celebrate 16 years together! An anniversary to remember. 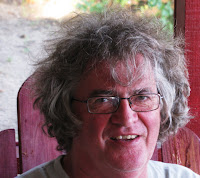 ( And next time we wash our hair in the river, I’ll remember to bring conditioner too)
Posted by Susan Ellis at 10:58 AM 5 comments: