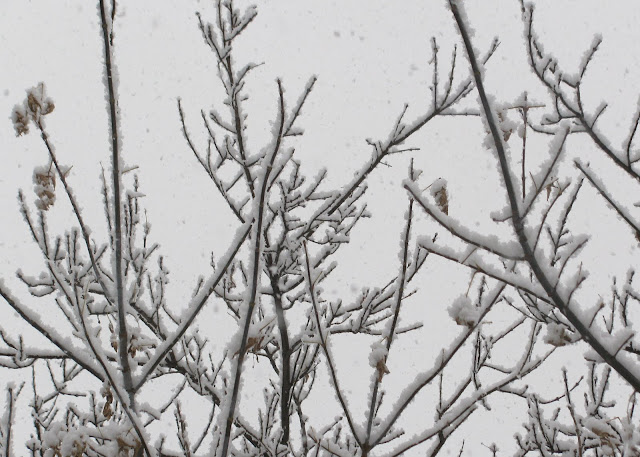 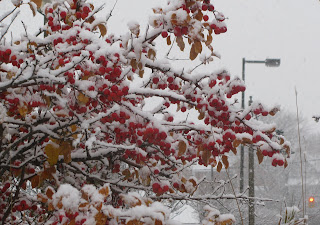 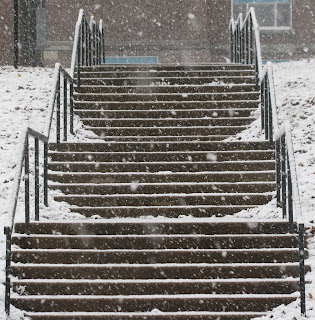 Several years ago I read an interesting thriller by Peter Hoeg entitled Smilla's Sense of Snow.  It was set in Denmark and Greenland and what struck me while reading it was the many different kinds of snow that revealed clues about a murder.  I'd never really thought about different kinds of snow before, although that's odd for a Canadian who spends about five months of the year dealing with the fluffy white stuff. 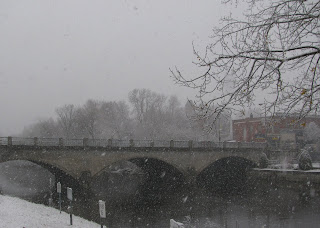 We northern climate dwellers spend an inordinate amount of time talking about the weather. And today, as the first snowfall of the season fell around us, the chatter turned to snow in all its variations. I agreed with the Treasurer who stated firmly that we all love the first snow...until we get to the age that we are the ones sent outside to shovel it. And it's true. Today it fell gently around us, and you could almost hear the jingles warming up to start the bells of Christmas!
The Operations Department Manager called today's snowfall "white rain". It took less than 5 seconds to process that it meant he wouldn't have to arrange for any snow plowing or sanding of the roads and sidewalks, because it was melting on concrete and asphalt surfaces. This kind of snow makes really good snowballs  as it sticks tightly together in your hands, and holds its shape when thrown at your friends or enemies. It's too wet for snowmen, and there isn't enough of it on the ground...which is still warm(ish) and preventing accumulation. 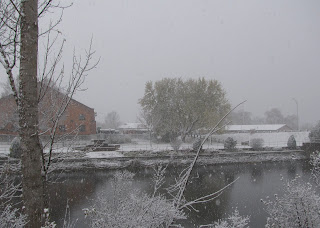 Tomorrow, all this snow will be gone. In time though, within weeks, there will be sugar snow, that is slippery and dangerous on the roads. Powder, which is excellent if you happen to be at a ski resort. There will be skiffs of snow, and crystal snow, and yellow snow. And there will be drifts, mounds, mountains and dumps of it.
Ah snow. 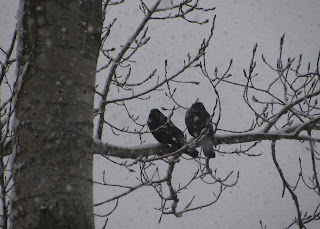 For today, the sky was beautifully soft and grey. And we all took a private moment and watched as nature blanketed our world with her cold and beautiful duvet.
Posted by Susan Ellis at 6:45 PM 10 comments: