Lilies of the woods 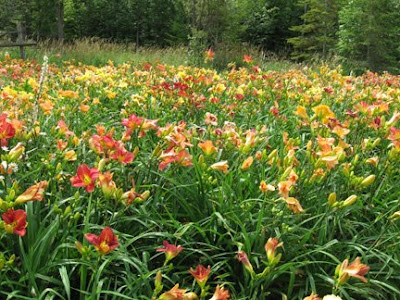 Driving home from Lindsay, Ontario last week, through the woods of eastern Ontario a river of red and yellow suddenly appeared on the left. One of those sights where you think, "What's that, that's, uh, that's flowers, holy crap, that's a whole huge road of lilies!Who puttemtherelet's stop!" And so, we did.
We were somewhere near Bancroft, and there was nothing else nearby, except of course, the proverbial little cottage in the woods. We pulled in to the driveway, and there was a sign, "Lilies For Sale" a slight understatement I'd say! There were literally 1000's of flowers!
My Grandfather, Dr. Arthur Brown, was a renowned Canadian horticulturalist and educator, and was also known as "The Prairie Gardener". He had a gardening show on CBC radio back in the 50's and would talk about plants and growing things and how it was all connected - an eco-warrior just slightly ahead of his time. I thought of him immediately when we saw all these lilies, as he had propagated his own variety. 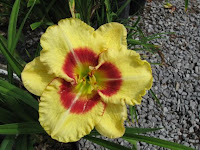 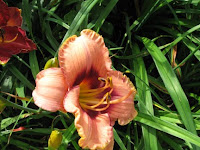 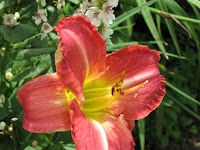 Turns out the elderly Dutch couple that live in the little cottage in the woods, have been here for the past 40 years, and the husband grows lilies to sell to collectors. I couldn' t afford any of them (at least not with my not so great gardening abilities.) He had varieties set aside that were going for the north side of $200. Huh! Who knew!?
Their yard, naturally, was spectacular, and we were free to wander around engaging all five senses. The lovely wizened wife told me that as her husband had been ill this past winter, he had only managed to propagate and pot up 1000 containers for sale in the past month. Hmmm. 1000 x $200...you do the math! Unbelievable! Puts a whole new meaning to having a green thumb doesn't it?

Posted by Susan Ellis at 2:47 PM No comments: