Has anybody seen my time? I've lost it. 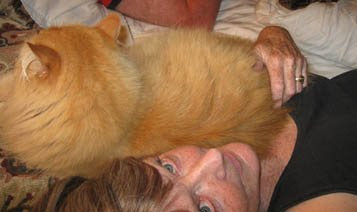 Utterly amazing how fast this past month has gone, and the other hundreds preceding it! I woke up one morning this month - my birthday actually, and thought I was drowning! I was in fact, in dander and fur! Gawd...breathing is definitely all it's cracked up to be. But , I never used to have allergies, and frankly, Scarlet, I don't really give a damn. I 'm not gettin' rid of the feline,and I ain't takin any steroids or whatever it is one takes. ( I may consider buying stocks in Kleenex).
So I was going to write about that particular incident in greater detail, but then the rest of the day intruded...and took all those thoughts away with it. Then I was going to write about a trip I took to the beautiful Haliburton Highlands, in eastern Ontario. It was a business trip, but I took my time getting there, and it appeared to be "Turtles trying to cross busy highway to get the other side day" and I nearly got myself splattered across the county road 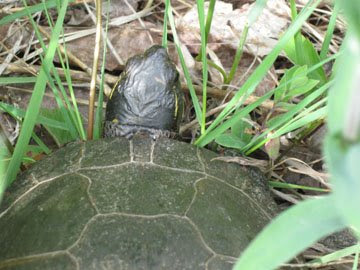 trying to save this not so little dude. There are only 3 kinds of turtles in our area - snapping, mud, or painted. I think this is a female mud turtle. I think female...who else would face speeding metal and steel and whining rubber to drop a few dozen eggs in a safe place? I actually stopped and darted out in to the middle of the highway on 3 separate occaisions that lazy afternoon! These turtles were hell bent to accomplish their mission, and I, apparently had become their designated life saver! Karma points! Woo hoo!
That being said, the road was winding and taking me through places I've never even heard of, but should, to wit -Cheerful Lane!! 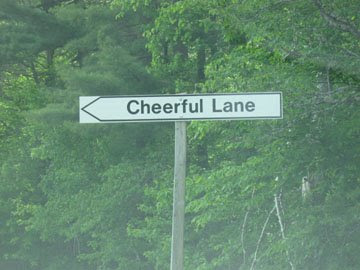 Maybe that's where all the turtles were headed! If so, I wanna go there too! Imagine living on Cheerful Lane! Are you allowed to feel sad on Cheerful Lane? Not for long I bet! Some little bluebird would likely come and sit on your shoulder...and fly away just before you got ready to smack him for being so bright and cheery!
Just down the road, there was another lane called "Cope Drive"...so I did just that. I coped with the death wish turtles to the best of my ability, and tried to be cheerful while I drove! I must say, that sights like this barn, deep in the ancient remnants of the Laurentian mountains, made it easy to cope. 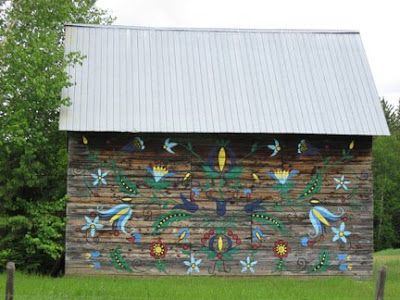 A village near Wilno, Ontario is the first Polish settlement in North America, and one of the groups of people from that area are the Kashubs. They are master artisans and crafters and as you can see, their barns are particularly cheerful!
This drive was taking me forever -mainly because I had turned it in to a mini I need a holiday day. Stopping wherever and whenever I felt like it. Thinking thoughts that middle aged women sometimes think about, while gazing at spectacular scenery like th 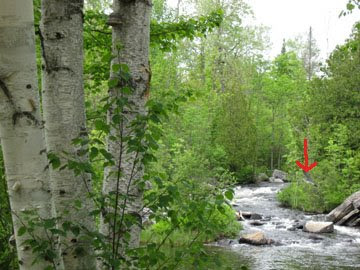 is...The little red arrow points to the Great Blue Heron I interupted when I stopped just to breathe in the fresh hilly air and listen to the babble of the brook. Stopped because there's so many things to think about, and really, so little time. We just don't know when our time will be up. So it's important to take time in as many chunks as we can possibly grab. And it's important to let friends and family, family especially, know that time is a gift not to be wasted. Ah-choo! Kleenex please!
Posted by Susan Ellis at 7:56 PM No comments: