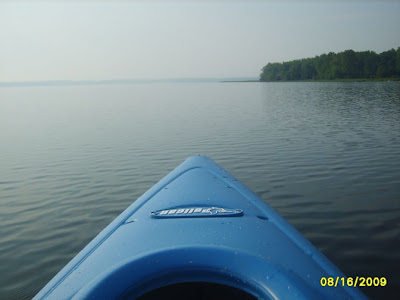 On Thanksgiving, we are encouraged to be thankful for the many gifts we have received throughout the year whether it be good health, food, shelter, friends aplenty and family to embrace.
I am thankful, very, for all of the above. But, I am really thankful this year for the kayaks that John bought so that he and I could spend time exploring our shorelines. We rarely found the time to do this -maybe once or twice all summer. 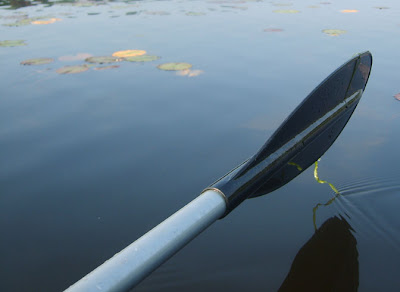 But then came the magic moment for me. A quiet time, no wind, no work, a perfect time to take the kayak and find out what was down in the bay to the right. The minute I slipped into the kayak, gliding quietly over the water beneath , rocking ever so slightly... time just shifted. I began to breathe.
My paddle started to write its own ode to the river. And slowly the shoreline began to reveal itself.
Walking along the shore you are tethered to the land, and your viewpoint is always outwards, over the water.
In the kayak, my viewpoint rotated inwards, towards the land, towards whatever was between it and me. 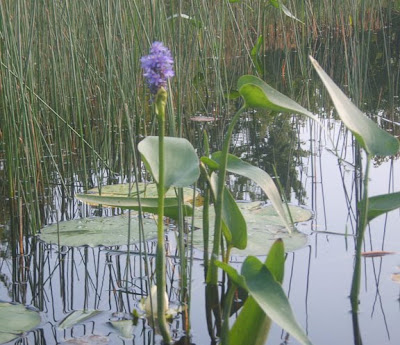 I was seeing the plant life from a linear perspective...a duck, an otter, a muskrat...this is how they see the river. Is pretty purple plant a thought only humans can have? Does the mallard look and like too? 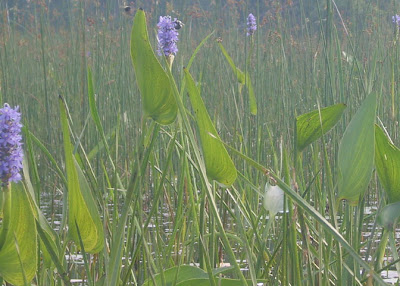 I paddled further along the shore, and the reeds began to thicken as I approached the bay. This particular morning was the quintessential hazy, hot and humid summer blessing of a morning. I was determined to get as close to this world as I could. And did. I was surrounded by buzzing, humming, practically sighing, life. Bees, birds, bugs - and they all ignored me completely. I was no threat in my little blue kayak and so they continued around me, and I soaked it all in. 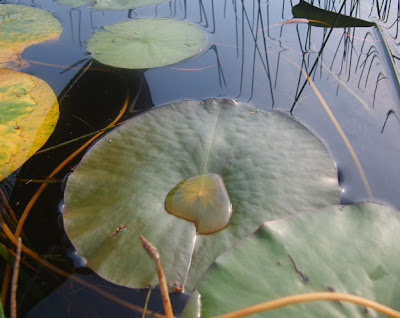 There is a whole world that we don't usually get to witness...this watery realm that has inspired artists and poets and songwriters (and bloggers).
I am so thankful that I could just, literally, point and click. Pure artistry presented on a lily pad. By Nature...
but captured this fleeting morning by me. Come winter, I will remember this. If I lived in a big city I would crave this.

The glimmering water world revealed itself in glorious showy perfection. A water lily 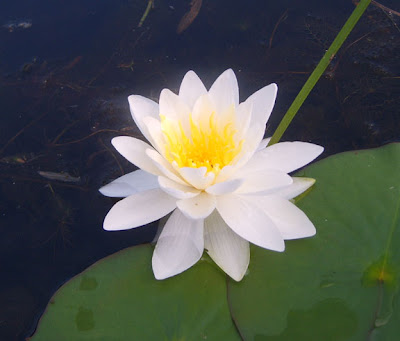 ...point and click. I am in awe.
And I am becoming, like George, curiouser and curiouser. I look around me, and there, just there - is a trail of sorts...an opening in the ever thickening reed bed. Who has been here before me? When? I am driven to paddle ever onward, now in complete sympatico with les voyageurs who first explored this beautiful river. They kept paddling, looking for furry gold. I kept paddling, wanting to know where the trail led. I was eight years old again! 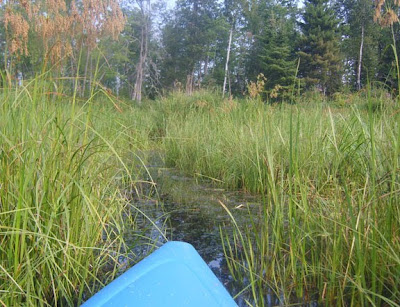 How can one say "No" ?
Well, perhaps one can, but I certainly took the bait- hook, line and sinker.
This, as you can see, is practically a little river! 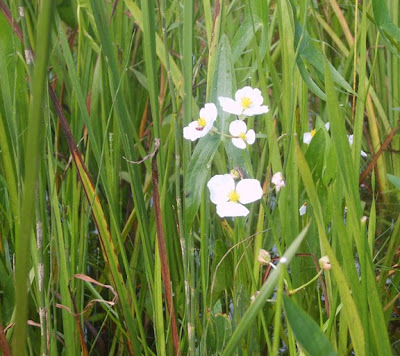 Every explorer is presented with diversions. I am not unique, but the white lily beside me is. Up close and personal, it is beautiful. I breathe deeply and smell the sweet clean scent of summer. And still I continue, for I am on a mission!

This little journey has totally captured me. I don't know what I am expecting to find really - perhaps a little cabin or campsite that someone is in the process of establishing. Perhaps a simple clearing. 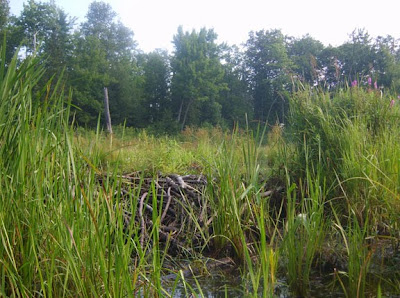 What I truly didn't expect to find was a dam!
And of course, it makes perfect sense! Quiet, private, end of bay, lots of reeds, fallen trees -it's prime real estate for a beaver. I've seen lots of beaver dams before, and beaver lodges, and beaver ponds. I've seen lots of beavers. But until this morning, I had never paddled up the beaver stream, right to the beaver's dam door!
Needless to say, I couldn't get out of the kayak, and after much backing and forthing I managed to do a U-turn and in fairly short order, I was homeward bound. 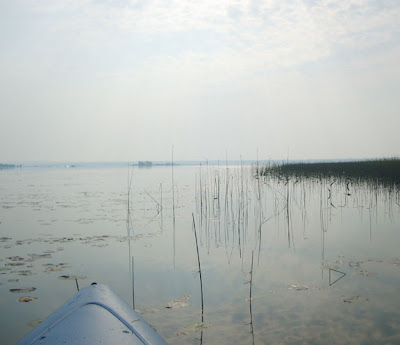 However, the morning wasn't quite over yet. As I paddled east the sun was warm on my face, and directly overhead, I heard the distinct call of the Osprey. I often see her fly by, fish held firmly in her feet, heading towards the bay I am now leaving. 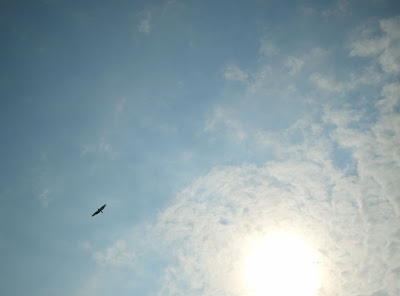 I know you aren't supposed to look directly into the sun, but if there's an Osprey there, well, you just do. And then you point and click.


My adventure, my perfect summer morning, was almost -but not quite - over... 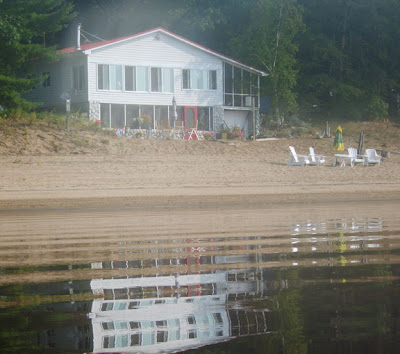 I paddled towards home, and in the last minute or so, brought out the camera for one final shot of our beachfront cottage that we love.
Now, it may look like there's a bit of morning mist burning off the cottage...and if you thought that, then you'd be wrong.
Because what you're actually seeing is a mini-miracle. It's actually water condensation in the camera, and proof positive that John is a true whiz, who was able to rescue all of these pictures from the camera, which I dropped into the river as I pulled the kayak ashore!
As I bent over to pick up the kayak, the camera, nestled ever so snuggly into my bathing suit strap, dropped into the water. I picked it up immediately but... it was total toast.
( I thought.) Next day, I had a new camera (which I love, and for which I am thankful), and a week later I found a folder on the desktop, entitled Susan's Lost Pics. Again, I am thankful!
Best day on the river all summer, best outcome possible as a result. Happy Thanksgiving!
Posted by Susan Ellis at 6:44 PM 3 comments: