And now for today's headlines... 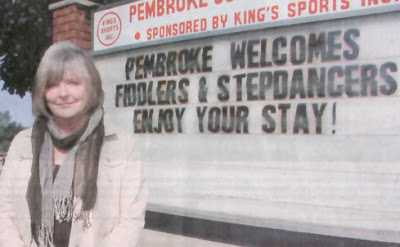 Today's front page of Canada's largest newspaper,the Globe & Mail had an article about Charges of criminal negligence being laid against Ontario's former Attorney General.
The Montreal Gazette featured an article stating that Actress Kate Blanchett is "fine" after hitting her head on a prop while filming in Montreal yesterday.
The Vancouver Sun had an article about Seal Pulls Girl into Water at the West Vancouver Marina (!).
On the opposite end of the country, the Halifax Chronicle Herald said that Halifax Shipyard Lands $194 million Contract. And on the prairies, the Calgary Herald says that El Nino to Deliver Forgiving Canadian Winter. All pretty interesting, important articles of information that may impact the lives of Canadians.
And here at home, The Pembroke Daily Observer in Pembroke featured a 10" x 8" photo of me standing in front of sign, and welcoming fiddlers and step dancers to the 34th Annual Fiddle Week. Now THAT'S news! Rosin up your bows and dust off yer dancin' shoes!
Posted by Susan Ellis at 7:31 PM 2 comments: