What is a Community in Bloom? 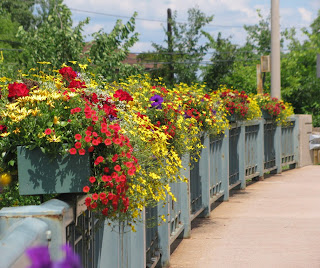 For the past several weeks, I have been consumed with Communties in Bloom, an international competitive civic beautification program that fosters civic pride and ultimately allows participants to cite tangible examples of improved quality of life within their villages, towns and  cities. This week the judges arrived to assess our efforts. One of the critical elements that is provided is a Community Profile Book that outlines all of the municipality's accomplishments in 8 different categories. This is used to help compare apples to apples as the judges travel North America and Europe, evaluating the entries. My job is to write that book, and this year it occurred to me that defining a community in bloom is not a simple thing...it's much, much more than hanging baskets of flowers....
This is the foreword to the book:
Eleven years ago, when Pembroke first enrolled in the Communities in Bloom program, the thinking was relatively straight forward: being a community in bloom meant that we would take better care of our surroundings, and encourage others to do so as well. It would look nicer, and therefore, likely be nicer. And that is exactly what happened.

That first year, driving into Pembroke on the day the judges were to arrive, I remember feeling awed at the changes I saw! Clean streets, beautiful flower beds, everything looked so nice and welcoming and there was an almost palpable feeling of hope and optimism for the future. Those feelings haven’t changed in the past decade – but some years you feel it more than others.
The past two years in particular have been interesting because there was a lot of negative economic news throughout North America and the world as the most far reaching recession in decades hit homes in the cities, towns and villages of Canada. Finally, this spring the business news picked up, jobs were created, and the world heaved a sigh of relief. Here in Pembroke, we emerged relatively unscathed, as our economy is not dependent on a single industry. Still though, families were stressed, and tough times were had.
They’ve been had before in this town, which started as a rough and ready frontier camp, with a scattering of tree prospectors staking claims to the tall stands of timber 180 years ago. There’s a boom, bust and echo story here that gets retold about every 20 years…but one thing that never changes is the spirit of the people who live in Pembroke.
The people of Pembroke are proud, stubborn, and relentlessly helpful when help is needed. They pitch in, pick up and pat their neighbours back the moment they hear someone’s hurting. It’s an awesome thing to observe. And that’s what a community in bloom is.
It’s a collective of people who respond to each other. There when the going gets tough, and there to celebrate after the job is done. A community in bloom is not just “that flower thing”, it is the communal spirit that plants the seeds of good will, and that regenerates and nurtures itself throughout time. In sickness and in health, for richer or poorer, for better or worse…that’s the spirit!
And that’s what makes Pembroke an incredible Community in Bloom. ...


What's YOUR definition of Community?
Posted by Susan Ellis at 2:09 PM 2 comments: