Ah, holidays are great! Here I am enjoying the fantastic weather and the absolutely beautiful beach on Assateague...part of the Barrier Islands of Virginia. Sun, surf, and sand...and hey, check out the guy sitting in the beach chair behind me... 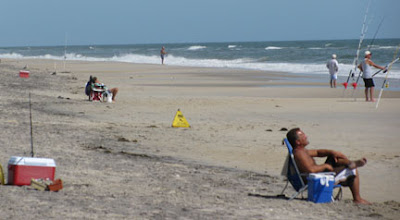 He is definitely into the R&R zone...cooler at hand, sunscreen (I hope) and he's not really nodding off, he's actually fishing! Who knew how relaxing a sport it could be! In fact, he has three lines on the go...and while there were several other fishermen on the beach, buddy seemed to be the only one catching anything.
As I watched, he reeled in a small Sand Shark. For someone from the Ottawa Valley, who thinks fishing is about small mouth bass, this is a BIG 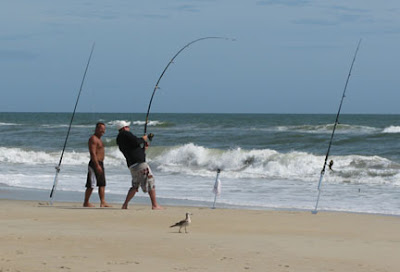 DEAL! Even bigger deal was the way in which he deftly reeled in the shark, quickly unhooked it, and threw it back into the water. I liked that.


Then, a few minutes later, his reel started to bend in that way that means "get over here, now!" So, of course being nosy tourists, we did. One guy must have said something especially nice, because all of a sudden, HE was the one reeling in the big one, while Mr. Catchanrelease watched and coached. See? Fishing is 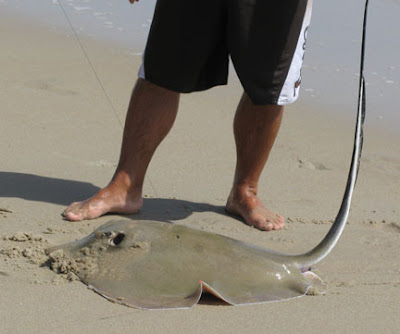 easy! It took about fifteen minutes of effort, and finally, what to our wondering eyes should appear?

A Stingray!! A large, lethal one that is closely related to the one that killed everyone's favourite crocodile hunter, Steve Irwin! And Mr. Catchanrelease just smiled, lifted its tail and pointed out the deadly spurs to the witless woman watching with mouth wide open. (Me). 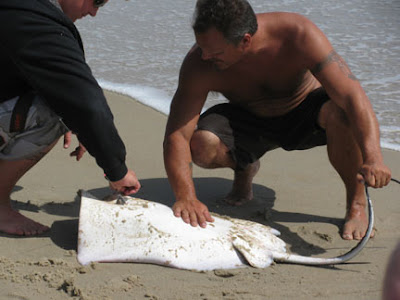 And then, he did something even more amazing! He rolled the stingray onto its back and began to rub its belly, and talk softly to it while the guy who landed it gently removed the hook. OMG.


And THEN, he took the time to show it to a little toddler before he carefully moved it back into the surf, free once more to tell the whole school of stingrays about the adventure on the beach it had just had! 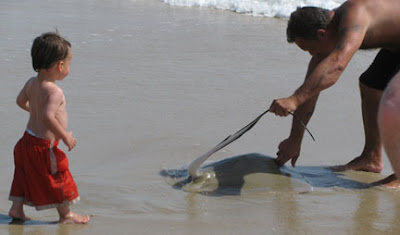 The guy who brought the beast in loudly proclaimed that landing it successfully had been better than sex!

And I decided I was in love. With fishing.

And if you happen to be Mr. Catchenrelease in this photo...thanks, it was great! TTFN
Posted by Susan Ellis at 8:26 PM 2 comments: