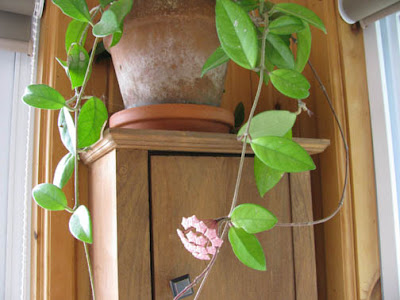 My maternal grandmother's family was part of the wave of Norwegian immigrants who landed in North Dakota in the late 1800's. They settled around Minot for starters, and then slowly spread throughout North America - a Grambo here, a Grambo there, everywhere a Grambo. Including one who ended up in Canada and married my Grandfather. Here a Brown, there a Brown...
Anyways! The man that Gramma married was seriously into plants, in fact, so serious that he became a plant doctor - with a PhD in Horticulture. They had beautiful gardens in every home they lived in, and naturally, many, many houseplants.

One of those plants was a hoya, in fact, it was a Hoya Diversifolia with thick rubbery leaves. It's the kind of plant that sits quietly in a corner, pretty much minding its own business, demanding little in terms of food or water. Actually, it's pretty much the perfect plant for busy people who like a touch of green but might forget to water for a few months. Not that Gramma and Grandpa would ever do
that ! I'm just sayin'...that someone like me might let the watering slide on occasion.
So, they lived many long years together, and raised five kids who grew into adults and had kids of their own - some 21 grandchildren, some of whom even display a talent for growing plants too.

Alas, eventually time claimed them both -Grandpa in the late 60's and Grandma in the early 80's. She lived a good life, in relative good health 'til she was 94. When she died, and her personal effects were all sorted out by her daughters, one of the things that was kept by one of them was her hoya plant. It moved from a corner perch in a southern Ontario bungalow to a highrise apartment in Canada's capital where it was kept entertained by Aunt Marg and Uncle Orv and their interesting friends for almost another 25 years, 'til it was their turn to shed this mortal coil. I tell you, if that plant could talk! It would have some great stories to recount! and lots of funny anecdotes, and a few tunes as well. So when the cousins cleared out the Aunt's personal effects, one of the things that was kept was Gramma's hoya. Only this time, clever cousin Margie decided it would be a good thing to divide the plant up, and share it with the other cousins. Which she did. One branch of that hoya now sits quietly in a corner in my home, where I regularly forget to feed or water it. In fact, I hardly notice it, until one day last week I did happen to see this thing hanging down from one of the tendrils it seems to have grown. Sure enough...closer inspection revealed a flower type growth... pale pink and pretty in a waxy sort of way. Yesterday it looked like this: 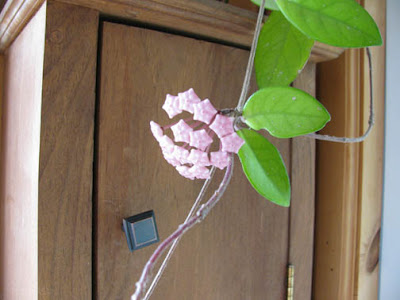 And not even 24 hours later, it now looks like this! Amazing! Just like my grandmother, Marie Pauline Grambo, was. I promise to try and take better care of it .... 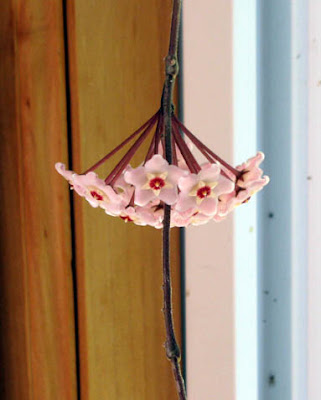 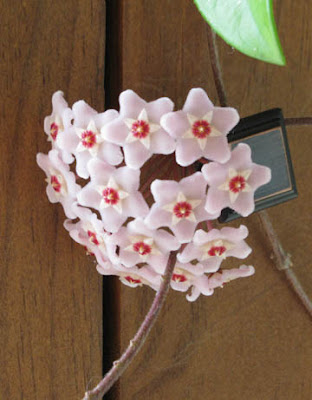