I never thought of myself as a birdwatcher, or one who even particularly cared about fowl things while I was growing up. But I have some very interesting memories of road trips with my Dad and his friends that now, in retrospect, surely contributed vastly to the growth in my interest in all things avian. On sunny Sundays in the fall, we kids would pile in to the back of the Ford station wagon, and Dad and a buddy would be in the front. Off we’d go, giving our Moms a break no doubt, while exploring the northern prairie parkland, and looking for hot puddle duck potholes that the men could go hunt the following morning. My Dad and his buddies were duck hunters. They weren’t too serious about it, they didn’t hunt because they needed to feed their families, but because they enjoyed the friendship and camaraderie that defined the hunt (along with the odd shot or two of whiskey no doubt). Landing a few ducks was a bonus that made it even more special to them.
One Sunday drive stands out above all others from those days. We crested a hill near Paradise Valley on a crisp autumn afternoon, and as we all got out of the “wagon” for a stretch a dark, flapping cloud appeared on the eastern horizon. Dad called me over to stand beside him to watch the birds fly over head…for a minute, then ten minutes, then half an hour, and then an hour, and then another! The prairie sky was alive with millions of ducks, flying, flapping, squawking, quacking ducks! Fall migration in the 1950’s, a sight I have never seen since and that I have never forgotten. The stuff of dreams.
Posted by Susan Ellis at 10:33 PM No comments: 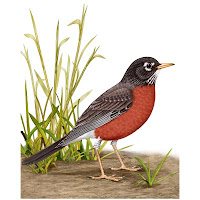 The very first bird I vividly remember was a robin in our backyard in Lloydminster, Alberta. I have a sun-filled memory of the grassy yard, and a tree at the end of the garage that flanked one side of it. In the tree was a nest, and as a curious, precocious four year old, I would sit on the lawn and watch the birds going to and fro. They had worms in their beaks, and the little nestlings would pop up as enormous mouths…waiting and noisy. One morning the happy birdie bliss shifted in to a confrontation with death, as I discovered a scrawny, blue veined baby bird, lying on the lawn and not moving. While the feathered feeding and to and fro-ing continued overhead oblivious to the drama below I learned two important life lessons: that flying creatures are enormously interesting, and falling out of a tree can kill you. Good lessons both.
Posted by Susan Ellis at 10:30 PM 1 comment: