Driving home tonight, I crossed the bridge into Quebec, and there, grazing on the golf course was a large flock of Wild Turkey. Gorgeous birds that just looked like they belonged exactly in that spot. And they do. Did.
Until they were hunted to the brink of extinction in eastern Ontario throughout the first 75 years of the 20th century
Thanks to the  conservation efforts of the Ontario Ministry of Natural Resources, and the National Wild Turkey Federation, who began to reintroduce the birds into Canada about 25 years ago, there are now about 100,000 turkeys estimated in eastern Ontario, and about 13,000 in our area. Those are good numbers and testimony to the fact that these big birds are pretty wiley. 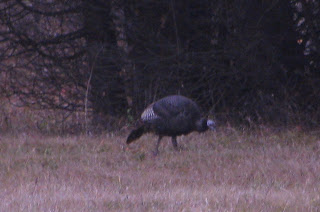 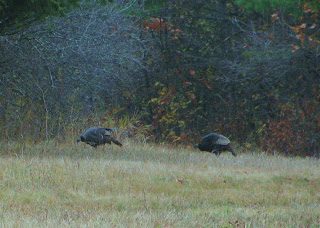 Gotta be a turkey to beat to a turkey who's hunting a turkey!
Posted by Susan Ellis at 6:42 PM 6 comments: