I feel old. NOT because my joints ache sometimes (they do), or  my hair's turning gray (it is), but because Hallowe'en has gone beyond the pale. At least, it's gone beyond my pale! As a young child in Lloydminster, I'd get dressed up in a home-made costume, usually an Indian Princess or a Fairy Princess, or a Wood Nymph Princess. My brother once went as an amazing Jolly Green Giant with green skin and leaves and stems. My sister (who's now in health care) went as a Nurse or a Doctor, and my other sister who was cute and chased by all the boys went as a Cheerleader or maybe it was Sandra Dee. The point is we reinvented ourselves every Hallowe'en into safe, funny, friendly characters. We'd go trick or treating, with our UNICEF boxes in hand, and come home with bags of junk that would be carefully sorted by type and colour. All apples  and popcorn balls went into a bowl...likely to be fed to the birds later...not because there was any fear of razor blades or poison, but because the apples were generally bruised and hours old popcorn balls were plain yuck! Candies we didn't like (like those thick and sticky molasses kissespulloutyourfillings things went into a pile for the adults, the good stuff went into a pile that was kept under the bed, where no one would find it -or remember it, til spring cleaning day, when it would get tossed as green and gross. Then of course, being in a small town, 'round about nine o'clock, all the little kids were indoors, trying to get the greasy make-up off and the teenagers would start their run around town throwing eggs and yelling and upsetting garbage cans. Pretty racey stuff!! 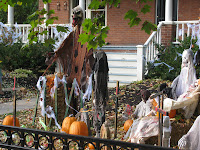 But NOW?? Now, thanks to all the forensics shows, the special effects shows, Martha Stewart and Steven Spielberg, Hallowe'en has gone berserk. If my kids were little there is no way I would take them out to see the decorating gone amuck show that has in recent years become the norm.They would have nightmares for weeks! I would have nightmares for weeks! So I ask, do you really need the blood, the guts, the gore??


You do? Hmmm...guess it's tricks for you then. Wonder where Freddy and Jason are?


(Ed.Note  -these pictures were taken yesterday in Lindsay Ontario which is having a Haunt Your House contest. Winner will receive $10,000 - half of which will go to the Boys and Girls Club. Gore With Heart.  It's a good start!)
Posted by Susan Ellis at 9:03 PM 5 comments: