Lunching with the Birds

The Waterfront ( at left, bird’s eye view in summer) is a beautiful park just minutes from my office, and today, as temperatures climbed up into the double digits for the first time since last fall, it beckoned.
The 2009 Spring List begins in earnest!
Song Sparrow - perched on top of a willow and singing his little heart out. He was being answered too, but I never saw that coy little one.
Canada Geese - preening on the ice flows where the Ottawa and Muskrat Rivers meet.
Common golden-eye, dippin’ and divin’ and generally showing off in front of the geese.
American Black Ducks – a small, noisy flock on the water, bathing and bein 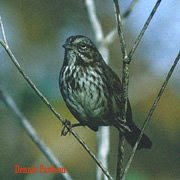 g rather quarrelsome with each other.
And the other usual suspects –ring billed gulls, crows, ravens and starlings –circling the lunch timers out for a stroll, hoping to pick up a cast off French fry or two.
Not a long list, but a beginning…and after this past winter, which was as long and cold and snowy as any I can remember, it’s a good beginning. “Cheer-up!”
Posted by Susan Ellis at 1:47 PM No comments: