Is it in Good Taste? How Apt is it?

A couple of days ago I ran across an article about aptonyms. It became my new word of the day as I learned it refers to the phenomenon of some people's names being particularly suitable to their professions. As in Dr. Dick Tapper, a urologist in Toledo, or Mrs. Shirley Loveland, a wonderful kindergarten teacher in Ottawa. Today I heard the best aptonym ever! It belongs to Mr.Dickie Arbiter...who is the Queen of England's former (ahem) press secretary. Dickie is quoted by CBC News as saying "I find what she's done extraordinary to comprehend". He is referring to Canada's Governor General attending a northern celebration in Nunavut with Inuit elders, and honouring their cultural traditions by eating a sliver of raw seal meat. (http://www.cbc.ca/canada/newfoundland-labrador/story/2009/05/27/gg-seal-snack-527.html) 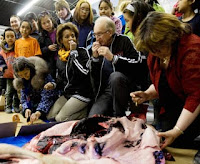 The British establishment is, apparently, in an uproar, thinking we Canadian's are pretty gauche, while vegetarian's world wide are going "ick". Anti-seal hunters are aghast, pro-seal hunters are happy happy, and pretty much every Canadian has formed an opinion by now.
Me?? Well, I think it's amazing that we love all things "Native" when it suits us. We can eat meat, but raw meat? uh, no. Who cares if it's done with respect for the animal that will feed a village, and has been part of the Inuit culture long before there were government regulated hunting and fishing seasons? ( I do, for one)
I also think GG Michaelle Jean is to be praised for respecting the traditions of an ancient culture and being brave (yes, I think this was a brave act on her part)to do it so publicly.
And Dickie Arbiter? Would you care for some Steak Tartare?
Posted by Susan Ellis at 6:42 PM No comments: