The trip to Point Pelee was a complete success! Great weather, lots and lots of birds (including 8 new ones for my life list) and the RV we rented was fabulous! A flat screen TV 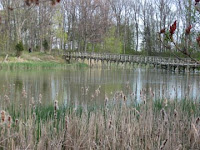 with satellite antenna? Who knew you could have all the comforts of home, in the middle of a provincial park, surrounded by trees and water! I actually got to watch the final episode of Gray’s Anatomy…(and I bet Izzy isn’t dead come September)…

But what really struck me this trip was all of the technology that seems to have inserted itself into our lives …not just satellite TV and radio, but, there I was, walking around Hillman Marsh and literally looking at a Grey Catbird on top of a sumac, when my cell phone rang. Hmmm. To answer or not? Caller ID identified my son in Calgary (2000 km away) so I answered, and he wanted to know about his cat! Specifically, can they/do they fight to the death? After assuaging his fears, we continued on our trek around the pond – which is a wonderful place 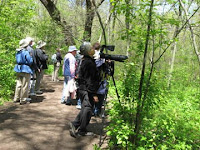 to see shorebirds. Lots of photographers set up their tripods on the edge of the marsh – and the competition among the digiscopers can get pretty fierce! I actually overheard one guy comment that he could actually count the feathers on the gadwall’s head. Digiscopers? Try explaining that one to your grandma!

The following day, back on the boardwalk at Pelee, amidst a group hike, we were trying with great difficulty to spot the Common Yellow throat who was adamant about sticking in the thicket of things. No problem, the man next to me pulled out his iPod, scrolled to a photo of said bird, and hit play…very softly mind you, as this was slightly against the rules of better birding…but in a flash, there was our little friend, sitting on the end of a branch, looking to see who was calling. iPod? Maybe something like a collection of eyeballs, laid out in a row, like in a pea pod?? I don’t know – and nor does Grandma.

To keep things interesting, many of us were twittering back and forth with friends and family –a little tweet here “Finally got a Northern Parula” and another tweet there, “Time for lunch, where are you guys?” I mean, you have absolutely no reason to be out of touch – even if you have a million reasons like you might want to be! Even saw one group walking 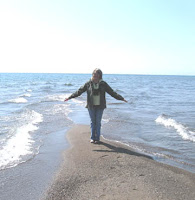 around with walkie -talkies, “Hey, Bert, come back to the Tilden Trail, that's where the Kentucky’s been spotted.” (Never did find it myself). And then there was Simon. Simon is the Brit who kept saying I was “a fruit”, until I figured out that what he (who lives inside a little black box) was actually saying was that we were “off route” and either follow his instructions on how to get back to the campground, or turn the damn GPS off! Which we did. Found our way back just fine…in time to watch the telly.