Up Close and Personal with a Sunflower 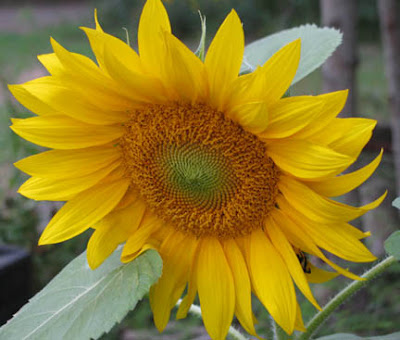 Inspired by Kelly at http://redandthepeanut.blogspot.com/2009/08/beauty-and-bee.html
I grabbed the new toy (which I love ) and headed to the garden. We have a few sunflowers growing...none where we planted them, thanks to squirrels, chipmunks, and birds who put them where they wanted them, and ate most of the seeds, save four, while doing so. But this one! This one is doing just what sunflowers are supposed to do: look great, and attract bees and birds and cameras.
A closer look at the flower reveals a little guest looking for some dinner... 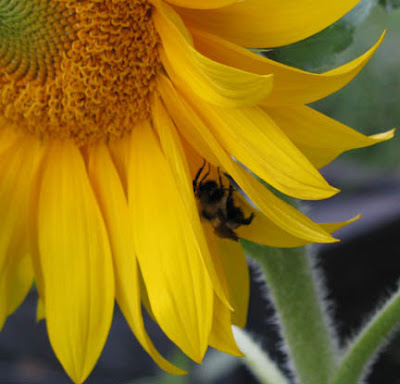 There's a relatively famous book (if you are interested in communications or advertising especially) called Ways of Seeing by John Berger. In it Berger says "It is seeing which establishes our place in the surrounding world; we explain that world with words, but words can never undo the fact that we are surrounded by it...In the act of viewing, we situate ourselves in the image we view, thus taking on a special, perspectival relationship to the things viewed." He says so eloquently what I'm feeling...which is to say, a tad voyeuristic...I like viewing the bee so closely, but I feel a bit like a Peeping Tom too!

Imagine what Galileo or Hans Lipperhey would have done with today's super zoom lenses! What spin would they have put on the stars and the moon and the sun?
Posted by Susan Ellis at 10:52 AM 5 comments: