Down By the Old Mill Stream

My Mom and Dad were pretty "Hip to the Jive", as they used to say. And they had this huge collection of LP's (Ed. note: gentle reader born after 1980, you may have to look this one up) to prove it. There were the Mills Brothers,  Louis Armstrong, Bing Crosby, Dean Martin, Frank Sinatra, The Lemmon Sisters, and many other collections of albums, including some by the Langevin Symphonette Society- the precursor to elevator music....or Muzak, as it's known amidst the  mad men. Musak is actually a patented type of music delivery system for elevators, department and grocery stores. Shoppers, it has been proven, buy more when there is perky, cheerful music to shop by. And they fight less when a funeral dirge is droning in the background of the outdoor stadium as the losing hometeam exits. On the same note, it is also why municipalities often play opera outdoors and illuminate an area with zit highlighting black light to deter teenagers from hanging out late at night.
But, I digress.
Back to the old mills, brothers.
On a recent country drive, looking for signs of spring, we took the road less travelled, and followed a local area map to Burnt Bridge Road. It is always, to me, a bit of a shock to find a lovely, hidden little patch of nature, and one of the thoughts I find myself always thinking at these times is, "Has anyone else been here before? Am I the first? " I might add, that this is asked hopefully, as I am one of "those people" who will find secret places to sign my name, like on the inside of window frames in my childhood home the day we moved, so that years later, it would be discovered that I had lived there. I know. Sad. But true.
In this particular case, I most assuredly  wasn't the first...but I felt like no one had been here for  at least awhile... 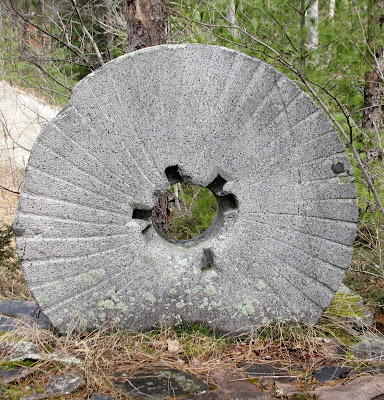 I've lived in the Ottawa Valley for about 25 years, and have never seen this grinding stone, or heard of it's existence before. But indeed, here it sat. A round granite monolithe in the middle of sort of nowhere.
And it had a friend. 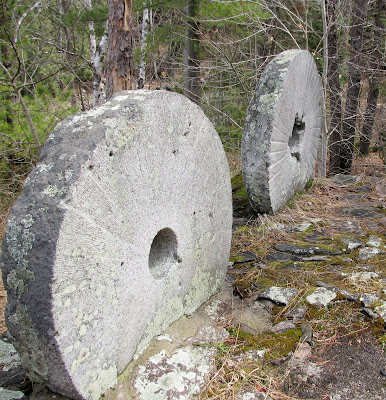 You know, when you're expecting something, like say, the Eiffel Tower to appear because you happen to be in Paris -when it appears, you're excited and slightly giddy, because it's smaller than you thought it would be, but exactly like it's supposed to look like. Only, uh, smaller.
Well. That's remotely what this was like.
"Well, lookie here!! Two grinding stones, in the middle of absolutely the bush in the middle of the  Sunday drive to nowhere!"
And they're big! Well, teeny mini stonehenges, but still -about 5 feet in diameter. They didn't roll here all by themselves, that's fer sure!
(We don't get out much you now know.) 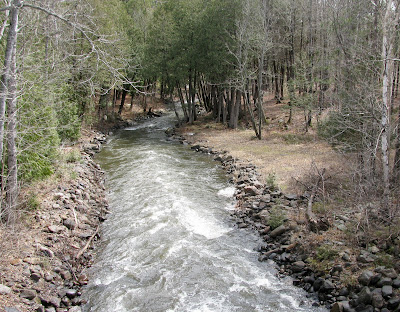 So, the Burnt Bridge had actually been rebuilt and standing on it, I could pick out this year's now not so secret   picnic spot to which you're all invited.
(on the right..see? where the sunlight hits just right?) 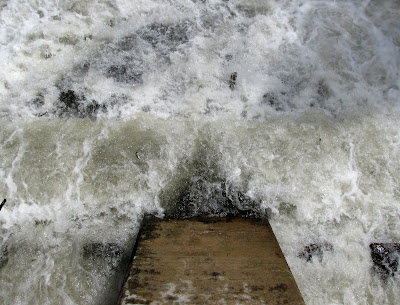 And time was spent in that ponderous moment wondering "where does all that water come from? Where does it go?"
Someone should have built a grist mill here a hundred years ago!
Oh. They did.
Clever, resiliant, reliable pioneers. 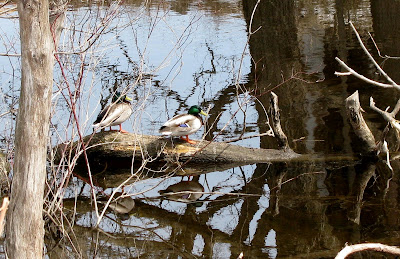 And while there were a few water watchers down by the old mill stream,
it became apparent that they'd rather be left alone.
Out in the middle of somewhere. 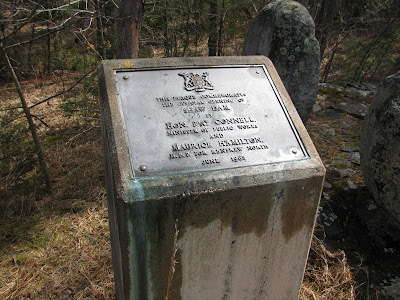 ﻿Someone had already signed their name. So, of course,  I didn't.
Posted by Susan Ellis at 10:57 PM 2 comments: