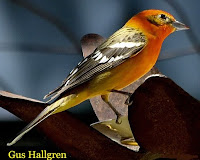 You meet the most interesting people when you least expect it! We were in South East Arizona, following the birding trail that we had devised, we being me and John, my “we’renot marriedbutwe’ve beentogetherfor16 years” mate.
One early morning, we were in Madera Canyon on a quest for the utterly lovely flame coloured tanager. As we walked along the winding canyon road, past quaint cottages, we could hear him singing his little heart out high above us. And we weren’t alone –which was such an odd and wonderful thing about birding in Arizona – to discover groups of people strolling around at 6:30 in the morning with binoculars hanging around their necks and smiles on their collective faces became quite commonplace! So, as we peered up and down, someone in the loosely formed, unintentional group, called it, “Over to the right in the tree next to the house!” And sure enough, ten heads spun to the right, twenty hands lifted their binoculars, and there was a group “Ahhhh!” One of the many, many memorable moments of the trip. The next happened immediately after. John, my intrepid side-kick, hadn’t brought his binoculars along, and when I asked if he wanted to see, he took a quick look, said “that’s nice,” and handed them back to me. Overhearing this, the woman standing in front of us turned and looking directly at John said, “You’re an S.O.B., aren’t you?” We both gaped at her –I mean ,really, that was a little uncalled for - when she immediately followed up with, “I am too! A Spouse of Birder!” We all chuckled, and then the impromptu conversation amidst the group started, with who was and who wasn’t a birder, (about half) but wasn’t it nice that they came out with us (It was. And is.)
Another day in paradise with my S.O.B.
Posted by Susan Ellis at 2:57 PM 1 comment: